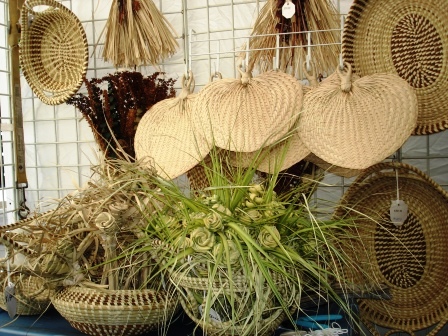 The making of Sweet grass Baskets have been a part of Mt. Pleasant SC. Communities for over 300 years. Brought to the area by slaves who came from West Africa, this basket making is a traditional art form from which have been passed on from generation to generation. Today, it is one of the oldest art forms of African origin in the United States. Mount Pleasant, South Carolina have the distinction of being the only place where this type of basketry is fully practiced. Here the descendants of slaves from West Africa continues this tradition. During the days of slavery, these baskets were in great demand for agricultural purposes. They also brought in extra income to slave owners who often sold these baskets to other plantation owners. During this era, large baskets were popular, they were used to collect and store vegetables, staples, etc. The men made these large baskets from the marsh grasses called (Bulrush). A common form of basketry was the winnowing basket(rice basket) called the ''fanner.'' other agricultural baskets were for the storage of grain ,cotton ,fish. The sweet grass basket was a necessity on the plantation. The art of weaving these baskets were passed down from father to son. The ''fanner was used to separate chaff from the rice on the rice plantation. As African slaves had work in the same agricultural disciplines in Africa, the process of separating the chaff from the rice was familiar to them. Functional baskets for everyday living in the home were made by the women. Some of these were made for bread, fruits, sewing, clothing etc. They were made from the softer, pliable grass commonly called sweet grass(Muhlenberg fillips),because of its pleasant fragrance, similar to the smell of fresh hay. This tradition remains very much alive today. For generations, it have been passed from mother to daughter to granddaughter. With the paving of Highway 17 North and the construction of the Cooper River Bridge made the route thought Mt. Pleasant a major artery. The basket makers then started sales of their baskets from roadside stands, which were directly accessible to the tourists. Today the serious problems confronting the basket makers of Mt. Pleasant is the dramatic decline in the sweet grass materials due to private development of the coastal islands and marshlands. Basket makers now having to go outside of their community as far as North Carolina and Florida to find their material. Purchasing sweet grass baskets is plentiful in Charleston. The art form is dying out. The older generation weave their baskets and sell them still along the highways and at the Charleston city market. The younger generation is not inclined to sit and weave baskets all day with modern cars and computers of today. Basket making has always involved the entire family. As was the custom, the men and boys gather the materials while the women and girls weaved '' the baskets. This custom continues today; however, in some instances, all members of the family are engaged in both the gathering of the materials and making of the baskets. The low country coil basketry is one of the oldest crafts of African origin in America. Today baskets are purchased by museums and art collectors throughout the world, such as the Museum of American History at the Smithsonian Institution. With proper care the baskets will last indefinitely, the basket value increases with age. Examples of the Low country coil basketry exist that is well over a century old. Because the grasses used in these Baskets are from the wetland and marsh areas, water will not hurt them. Coiling, unlike any other basketry technique is a process of sewing the material together by stitching one row unstop of the row below it. Each row is constantly fed with new grasses to maintain a continuous stream of uniform thickness. Spiraling out from the center by a strip of palmetto. The weaving techniques involve stitching and piercing of the material and cannot be duplicated with machinery.